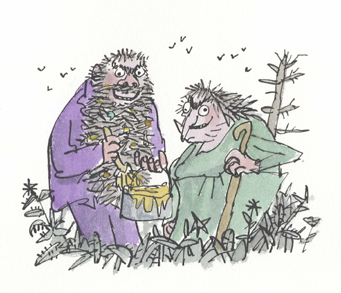 Mr Twit, from "THE TWITS" is the most disgusting and cruel character created by Roald dahl. He mistreats animals and never grooms himself. Roald Dahl hated beards and thought they were grown to hide something horrible about a man's character. He thought beards were dirty because food gets stuck in them so that's why Mr Twit has a beard. 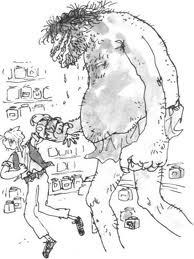 Another bearded villain is called the Bloodbottler.
This giant eats people. He also goes to the BFG cave
and messes everything up. This villain is very greedy,
unhygenic and indecent. The other evil cannibal giant
in the BFG is the Fleshlumpeater.

Miss Trunchbull is the villain in 'Matilda'. Her appearance is queen-sized and she wears her hair in a bun at the upper rear end. Her personality is sadistic, extremly cruel and she terrorizes children. She dislikes children and states that she was glad that she was never allowed to be a child and have fun. Her idea of detention is to put children into a horrific torture device known as the Chokey, a tall narrow cupboard in a drippy pipe with jagged edges where the walls have broken glass and nails sticking out, like an iron maiden. She is obsessed with rules where she did not allow girls to have pigtails. She also does not like boys with shaggy hair. She once threw a girl named Amanda Thripp over the fence by her pigtails, forced a boy named Bruce Bogtrotter to eat a whole 18-inch cake because he had stolen her own personal snack and once almost killed a boy by throwing him out a 5 story window due to the fact that he was eating Liquerice Allsorts while she was talking to his class.
Powered by